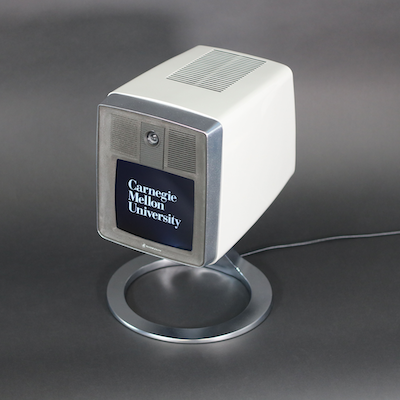 "Some people in Pittsburgh are seeing voices."

That's how AT&T Bell Laboratories advertised its first commercial Picturephone in 1970. The print ad goes on to say that while it would be a lot of work to build a new type of communication network, "Picturephone service is a reality in Pittsburgh, Pennsylvania," and will soon be available in Washington, D.C., and Chicago.

"While FaceTime, Skype and Zoom are easily accessible these days, when video calling premiered, it was an expensive process reserved for the elite or major public events," said Andrew Meade McGee, a CLIR postdoctoral fellow in the History of Science and Computing in the Carnegie Mellon University Libraries.

"As soon as the telephone was invented, people thought about how to transmit more than just voices," McGee said. Early 20th century forerunners of fax machines transmitted images over telegraph wires or radio waves, and the 1920s saw the earliest experiments with one-way videocall transmission. The post-World War II period brought efforts to design a reservable video booth system, which connected directly to other distant booths.

AT&T invested hundreds of millions of research and development dollars in videophone technology from the 1940s to the 1960s. The Mod I Picturephone appeared at the 1964 World's Fair, but it was the Mod II model that ushered in the first commercial network for video calls.

"The Mod II was brought out of the laboratory and into the consumer experience as a viable system for everyday use," McGee said. "Just two years before that, the film '2001: A Space Odyssey' showed people the futuristic technology of video calls, and then AT&T took concrete steps to bring it into the world."

"It was cutting-edge technology at the time," said Chris Harrison, an assistant professor in the School of Computer Science's Human-Computer Interaction Institute and self-proclaimed amateur historian. "If you wanted to make a phone call in 1970, the analog audio signal would be transmitted on a phone line from one caller to another. But video is a different story."

Video requires a much higher bandwidth than audio, and for this, the Mod II required three phone lines. One transmitted voice, just like a regular phone call. "They used some very clever techniques to compress the video onto just two additional analog phone lines," Harrison said.

Harrison and McGee both had to see the Mod II for themselves, so in 2019 CMU Libraries purchased at auction a set of two of the Picturephones — originally owned by a Bell Labs engineer — still in their original packaging. "The wooden crate with 1970s foam was really disgusting," McGee said. But the machines inside were impeccable.

Harrison said the sleek silver devices looked futuristic when they premiered, and that the exceptional quality is likely the reason they've survived so well. "We both thought it was a really beautiful piece of craftsmanship," he said.

To get the machine up and running again, Harrison initially wanted to run video on the original hardware. "There's no public manual that tells us things like how many volts the cathode ray tube (CRT) screen needs. Rather than risk the precious hardware, we set aside the original electronics and inserted a new telecommunications platform." Harrison installed a computer with a modern screen and camera to simulate the original system.

Read the rest of this story at CMU News.