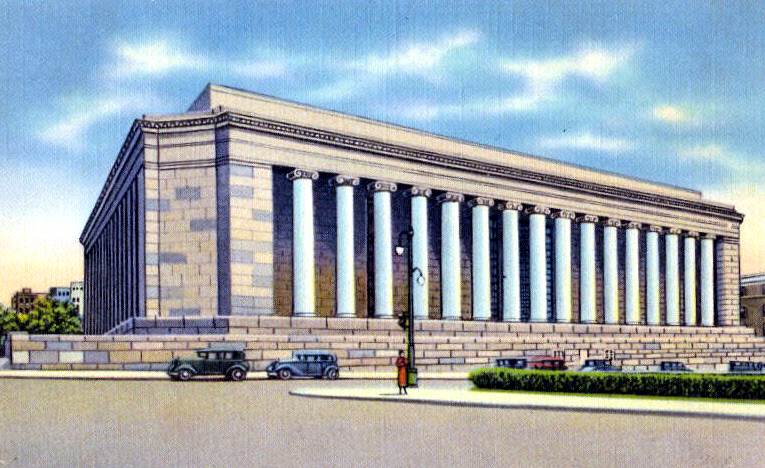 A postcard view of Mellon Institute, circa 1939

In 1967, the Mellon Institute of Industrial Research, one of the nation’s premier independent research centers, merged with Carnegie Institute of Technology, a rapidly growing, forward thinking university, to form what we now know as Carnegie Mellon University. By joining the two institutions, the architects of the merger hoped to create an institution that would make Pittsburgh as famous for science as it was for steel [1].

I recently joined the University Archives team as part of this year’s anniversary celebrations, in order to make the Mellon Institute of Industrial Research Records – an enormous collection of more than 375 boxes of correspondence, publications, scrapbooks, promotional materials, scientific reports, photographs and other materials – more discoverable and accessible to researchers and the public. We know this collection will shed new light on the institute’s remarkable history, as well as the history of applied sciences and industry. To do this, over the next 24 months I will be “processing” the collection, a term archivists use to talk about arranging and describing materials so that they can be easily found. I am also rehousing the materials in acid-free folders and boxes, addressing preservation concerns, and flagging materials for potential digitization.

You might be wondering: what was the Mellon Institute of Industrial Research? Established in 1913 by Dr. Robert Kennedy Duncan, a chemist and professor, and financially backed by Pittsburgh financiers Andrew W. Mellon and Richard B. Mellon, the Mellon Institute of Industrial Research was conceived to solve the immediate needs of industry. At the time, engaging scientists to investigate industry’s problems was a rather controversial notion, as the industrialist regarded scientists as “impractical visionaries”, and in turn the scientists viewed the industrialist as “a rank materialist dedicated to the marking of money” [2]. But Duncan felt differently. He was inspired by partnerships between scientific research and industry he observed while on a research trip to Europe. In his 1907 book, The Chemistry of Commerce, he proposed an industrial fellowship program – where industry could employ trained scientists to investigate its problems. The Mellon brothers were attracted to Duncan’s idea and brought him to Pittsburgh to start an industrial fellowship program at the University of Pittsburgh. Eventually in 1927, the institute separated from Pitt and incorporated as an independent, non-profit organization.

While the Mellon Institute of Industrial Research no longer exists, the colossal building bearing its name remains at the corner of Bellfield and Fifth Avenue in Oakland. Designed by the Pittsburgh-based architects Benno Janssen and William York Cocken, and dedicated in 1937, the building takes up an entire city block. It’s iconic 62 columns were hand carved by artisans and constitute the largest monolithic column installation in the world [3].  These days the building is home to the administrative offices and research laboratories for CMU’s Department of Biological Sciences and Department of Chemistry and CMU’s Mellon Library. It’s also a hot spot at dusk for wedding parties looking for a neo-classical background for their photos.

My work will eventually culminate in a finding aid that will be published on the University Archives website (https://digitalcollections.library.cmu.edu/). However, as I process the collection, I will be sharing tidbits from the institute’s history, fun discoveries from the archive, as well the stories of the individuals who made the Institute tick. So, be sure to check back often and keep your eyes peeled new posts on Scotty Tales, the university archives blog. And if you have any questions about the institute or the collection, don’t hesitate to ask! Contact the University Archives at archives@andrew.cmu.edu or 412-268-5021.