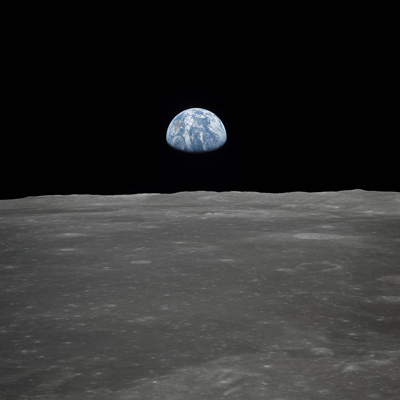 On July 20th, 1969, an estimated 600 million people witnessed the live broadcast of the first manned lunar landing known as Apollo 11.  Astronauts Neil Armstrong and Buzz Aldrin left the lunar module to become the first human beings to step foot on the moon, while Command Module Pilot Michael Collins stayed in orbit.  This was the first of many historic events to take place on the moon that day.  Armstrong’s left foot was the first human footprint left on a lunar surface, while the first meal eaten on the Moon consisted of four bacon squares, three sugar cookies, peaches, pineapple-grapefruit drink and coffee.  Many technological achievements also occurred, with the deployment of the first solar wind experiment, the testing of landing systems and radar, and the first-ever collection of lunar soil and rock samples. The three astronauts safely returned to earth July 24 as heroes, riding in ticker-tape parades in both New York and Chicago.

But as Buzz Aldrin would state, “This has been far more than three men on a mission to the Moon; more, still, than the efforts of a government and industry team; more, even, than the efforts of one nation. We feel that this stands as a symbol of the insatiable curiosity of all mankind to explore the unknown ... Personally, in reflecting on the events of the past several days, a verse from Psalms comes to mind. ‘When I consider the heavens, the work of Thy fingers, the Moon and the stars, which Thou hast ordained; What is man that Thou art mindful of him?’”

The cultural impact of this event that occurred 50 years ago this Saturday was not only felt in the hearts and minds of individuals everywhere, but in the sciences as well.  Leaders in the fields of robotics and lunar logistics, such as Carnegie Mellon University, continue to build upon the technological achievements set forth by this historic day.  Most recently, NASA chose CMU’s Field Robotics Center – in partnership with Astrobotic – to manufacture a lunar rover known as the MoonRanger.  The rover will be used to accomplish long-range exploration missions and produce detailed 3D maps of the moon’s surface.  Without the work of the Apollo 11 astronaut crew, and the countless supporting individuals who made that historic day possible, spectacular achievements such as this would never be realized.

Learn more about the first moon landing and other Apollo missions in Exploring the Moon: The Apollo Expeditions, available in our library catalog.