Men and Women of World War I 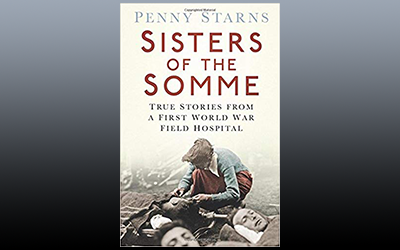 Fear: A Novel of World War I by Gabriel Chevallier

Sisters of the Somme: True Stories From a First World War Field Hospital by Penny Starns

Certain things you expect from an anti-war novel -- horrific slaughter with no perceptible gain and nonsensical orders from out-of-touch officials. What I didn’t expect in Fear, Gabriel Chevallier’s autobiographical novel, was the depth of insight, the moral questioning, and the occasional pause for absurd humor amidst the chaos.

As the story begins, 19-year-old Jean Dartemont watches France jump into the fervor of war. “It starts just like a festival,” he says, and enlists more from curiosity than patriotism. One street scene chilled me with its relevance to current American debates: a man outside a café is verbally, then physically assaulted for his refusal to stand for the Marseillaise. As nationalism escalates, Dartemont sees drunken soldiers harassing passers-by who they take for Germans, while other French people applaud.

Dartemont goes through basic training and deployment, uninterested in the military advancement his father wants for him. In his first battle, he sees two of his classmates wounded and crying for help, and realizes “war had stopped being a game.” The loss of innocence and potential comes up often; shoveling out a trench, Dartemont exposes the corpse of a soldier young as himself. Later, after another battle, he realizes he is only twenty years old, “the age of which the poets sing.”

Wounded by shrapnel, Dartemont is moved to a field hospital, then to a hospital away from the front. Chevallier’s writing already jarred me with its blunt, casual racism and misogyny (doubtless more open and accepted at the time), but the hospital chapter almost stopped me completely; I plowed through the narrator’s odious comments about the head matron and the nurses. Still, Chevallier’s descriptions of soldiers’ pain and madness in the hospital are as wrenching to read as his fast-moving battle scenes.

Recovering and home on respite, Dartemont chafes at his father’s friends’ sociable chat about the war: “I was ill-mannered. I made myself unbearable.” Soon he takes the train back to his unit. He describes soldiers with shellshock and notes their shame and survivor guilt. A comrade describes the battle of Verdun, trenches piled so high with corpses “we were walking through meat.”

There are so many powerful passages and intriguing debates in Fear, I’m glad I decided to keep reading. “Suspended between luck and death,” Dartemont survives until the Armistice and concludes bitterly “My homeland is whatever I manage to earn or create. Once I am dead, I don’t give a damn how the living divide up the world.” After experiencing the intensity of Fear, I’d put it alongside Erich Maria Remarque’s All Quiet on the Western Front and Dalton Trumbo’s Johnny Got His Gun as one of the great World War I novels I’ve read.

Dartemont’s contempt for his nurses stuck in my mind, however, so I turned to a different account. Penny Starns’ Sisters of the Somme: True Stories from a First World War Field Hospital uses reports, letters and diaries of doctors and nurses from the St. John Ambulance Brigade Hospital. Built near the front lines at Etaples in France, the hospital was staffed by British nurses and young women volunteers with minimal training.

In Fear, Dartemont characterized the nurse matron as heartless and petty, discharging patients she didn’t like, sending them to face death once more. Sisters of the Somme revealed the massive overcrowding that forced hospitals to release patients when they could. After each military attack, “walking wounded” and “stretcher cases” overwhelmed the hospital and the staff. Nurses often worked to exhaustion until their legs and feet swelled and their hands were raw.

Contrary to the romantic image of wartime nurses, matrons lectured on morality and modesty, banning any flirting or relationships between nurses and patients. Still, nurses provided emotional support to men with fatal wounds and disease, and they experienced grief and shock on a daily basis. Hospital administrators allowed nurses breaks for respite and “at least one emotional breakdown before their contracts were terminated.” In quieter periods, staff tried to provide cheerful holiday entertainment for the soldiers and educational opportunities for the volunteers.

Some nurses discovered an ability to work in crisis, “amidst an ever extending carpet of blood and khaki,” performing triage even when it was “difficult to know which way to turn or who to help first.” One stark image for me was the nurse who held a cigarette for a dying man with one hand and picked shrapnel out of another soldier’s wounds with the other. Inspired by the serenity of St. John’s sisters, and by the organizational skills of matrons, the nurses supported each other and kept going by sheer willpower.

The heroism of the staff was tested tragically in May 1918 when German aircraft dropped four bombs on St. John’s, even marked as it was with a clearly visible red cross. Twenty-seven were wounded and fourteen killed. Relocated to other hospitals, the surviving staff kept working as St. John’s was rebuilt. Although I wished for more direct quotes from the women themselves, Sisters of the Somme gives quite a different picture from Dartemont’s in Fear, testifying to the strength of the women who cared for the men of World War I.