The Boy on the Beach 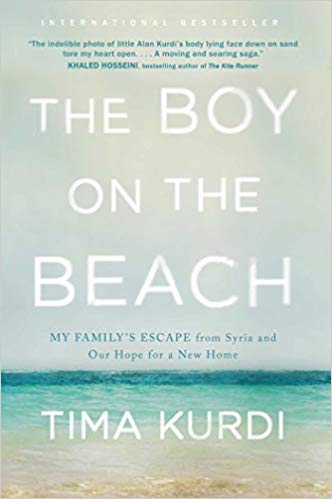 The heartbreaking photo is seared into our consciousness: the little boy face down on the sand. At first glance we want to believe he’s sleeping peacefully; then we realize he’s been drowned in his family’s desperate attempt to escape from Syria. Tima Kurdi, the little boy’s aunt, bravely takes us through each agonizing turn until we understand why her brother Abdullah took his wife and their two boys on this dangerous journey.

Since September of 2015, when the photo of little Alan Kurdi went viral, we’ve seen images of refugees internationally and within our own U.S. borders –  children in cages, and the drowned father and child on the shores of the Rio Grande. How do conditions worsen to the point where parents have to flee? The answers are the same in Syria as in Latin America: gang violence, kidnappings, interrogations and murder by police and rebels. Neighbors turn against one another, and everyone is a suspect.

In Syria, a group of “long-bearded men” abducted and tortured Kurdi’s brother Abdullah for days, yanking out his teeth one by one until he lost consciousness. Eventually realizing they had the wrong man, the terrorists threw him into the street, threatening him and his family with death if he told anyone. The “long-bearded men gave themselves a name: ISIS” and Syrians fled into Turkey, Jordan, Egypt and Kurdistan.  Abdullah travelled for miles through dangerous territory to work, just to provide minimal shelter and food for his wife and two sons. Shortly after little Alan was born, Abdullah hired a smuggler to take them across the border into Turkey, but they faced more poverty and danger there.

Kurdi had moved to Canada, and she tried to send money, plead with officials and complete the paperwork to bring her family to safety, but she was unable to secure the necessary documents. She visited and saw what her brother’s family had to endure. “You can’t shake the feeling that you are a ghost among the living,” she says. “I learned that this estranged state of mind is common to refugees.” Her brother and his family were living on the streets, begging for food, helped by some Turkish people and scorned by others.

By this time, Syrian refugees numbered about seven million displaced within the country and four million outside their home country, making this crisis the worst since the Second World War. As Kurdi says, “The refugees were victims of terrorism and global geopolitics, yet they were increasingly viewed with the same suspicion and hostility as the terrorists they had barely managed to escape.” I saw so many parallels between the Syrian refugees and those on our southern borders – the same desire to protect and provide for family, to walk through danger towards a better life for your children.

Kurdi’s hope is that “by reading my family’s story, you will be able to see that we are all essentially the same: we all dream of healthy, peaceful, safe lives for the ones we love. People are more important than money or power. We are more similar than we are different, and we are stronger when united.” I marveled at her ability to tell such a painful story with clarity and grace, and I hope more people pay attention to her words.

Check out The Boy on the Beach: My Family’s Escape from Syria and Our Hope for a New Home by Tima Kurdi, available in our library catalog.