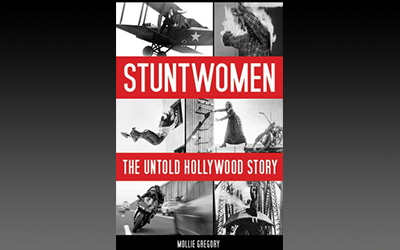 Caught up in a movie, we gasp when an actor tumbles down steps, crashes a car or jumps off a building. Mollie Gregory’s Stuntwomen: the Untold Hollywood Story shows us the women who were brave enough to take the falls and strong enough to urge film directors to “get the wigs off men” to open up more roles for women in the stunt field.

In the era of silent films, many women wrote, directed and produced movies. In popular serials like The Perils of Pauline, stuntwomen jumped onto moving trains and swam treacherous waters in thrilling sequences that brought audiences back week after week. Ironically, when movies became profitable, men were hired to double for women. (One notable exception, 1939’s Destry Rides Again features Helen Thurston as Marlene Dietrich in a down-and-dirty saloon fight with another woman.)  In addition to men taking women’s parts, men were “painted down” with black makeup to double for African American actors.

Stuntwomen struggled to make connections in the men’s networks; often, only women who belonged to a stunt family could find work. Sexual harassment was rampant, and lower pay for women continues to be an issue. Increasing opportunities for black actors came first in “Blaxploitation” roles and later in more substantial parts. As African American actress Gloria Hendry says, “We were beginning to make our own stars, our own movies, the door to filmmaking was wide open and that was brand new! It was so exciting.”

In the 1970s, Steve McQueen and other actors broke the code of silence and admitted they had stunt doubles, which brought more recognition to the field. Also, the position of stunt coordinator was created, although women weren’t often hired for it. In the 80s, widespread drug use in Hollywood made some crews more reckless and stunts even more dangerous. Stunts were filmed at the day’s end, in a rush. One cameraman for the TV series CHiPs stated bluntly, “They have the Humane Society out there to protect dogs and horses, but they don’t have jack crap for us.”

Injuries and even death were inevitable, and Gregory details the accident on the set of the “Twilight Zone” movie that killed Vince Morrow and two children. Stuntwomen were also injured and killed, as Gregory describes in gut-wrenching detail. Stunt people seem fearless, but they are skilled athletes who execute their tricks with precision. If a car isn’t properly equipped, or an airbag isn’t set correctly, it can be fatal. Women’s costumes always showed more skin, leaving no room for padding – which matters when you’re tumbling down stairs and landing on the floor.

Representation in the Screen Actors’ Guild helped to raise safety standards, but stuntwomen had to organize, sue for damages, and endure industry blacklisting before conditions finally began to improve. With the advent of computer-generated imaging, green-screen and other innovations, stunt work has changed, but it still has a place in movies and TV.

Whatever genre you enjoy – action, drama, or comedy – it’s likely that stunt actors created part of the magic. In fact, it was fun to read references to stunt work in TV shows and movies I would never have expected (Seinfeld? Terms of Endearment?). At times, the book lags with lists of movies and names. Still, it’s fascinating to read about the real lives of women that scare and shock us on screen.