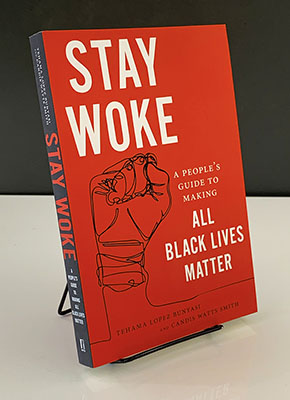 Stay Woke: a people’s guide to making all black lives matter, by Tehama Lopez Bunyasi and Candis Watts Smith (New York University Press, 2019)
Reviewed by Jan Hardy.
Stay Woke is a down-to-earth handbook for combatting racism, with words in bold type and practical suggestions for action. And throughout, Bunyasi and Smith maintain a cheerful, encouraging tone.
First, the authors detail how the history of segregation shapes our current racial divide, where we mostly socialize with folks similar to us. They discuss how some hear “Black Lives Matter” as “White Lives Don’t Matter,” and “Black People Hate the Police.” The authors clarify that “Black Lives Matter” is a movement against white supremacy, and show how economic, social and even psychological benefits have historically been, and are still, provided to whites on average. Structural racism is “a well-oiled machine that reproduces racial inequalities and enhances white privilege without the need for very much maintenance.”
The authors provide data showing how Black citizens are at risk, and link data on blacks killed by police to data on blacks who were lynched a century ago. Recalling Michelle Alexander’s "The New Jim Crow: Mass Incarceration in the Age of Colorblindness," they list how African Americans are treated differently at every level of the criminal justice system. Refuting the common argument “What about black on black crime,” they argue “white on white crime” is not seen as racial but individual.
The chapter on “All the words people throw around” provides context for terms that often come up in discussions on diversity. The section on “racial euphemisms'' points out “the terribly misguided notion that talking about race makes you a racist.” They outline words like “exotic,” “tough on crime” and “diversity hire” alongside “another way to think about it.” I especially enjoyed the listing for “reverse discrimination: There. Is. No. Such. Thing.” The authors quote Robin DiAngelo’s "White Fragility: Why It’s So Hard for White People to Talk About Racism," saying that white allies need to develop racial stamina, and urging (with tongue in cheek), “Learn from your misunderstandings. Keep your eye on the prize."
Bunyasi and Smith give ten concrete suggestions to counter racism, such as writing letters to the editor of local papers, donating money to antiracist organizations, and attending local city council meetings. They observe that the US only became a true democracy in 1965 with the Voting Rights Act, and that democracy (as we’ve seen) is still very fragile. The idea of reparations, intimidating to some, can be reinterpreted as scholarships, access to food and health care, or even in terms of Maxine Waters “reclaiming her time” to speak. Microaggressions can be replaced by white allies’ micro-reparations of silent listening and support when Black people speak.
One affirmation in this last chapter, “Beware of Woker-than-Thou-it is!” especially hit me, with the advice “Go on now and be useful to the causes you believe in by taking all your woke knowledge and making it translatable to working with others.” The authors advise patience, recalibrating our sense of time in this era of rapid communications. Remaining positive, and even having fun while we do the work is key for success. And change is possible.
, See all tags
andyp, 05.02.2021