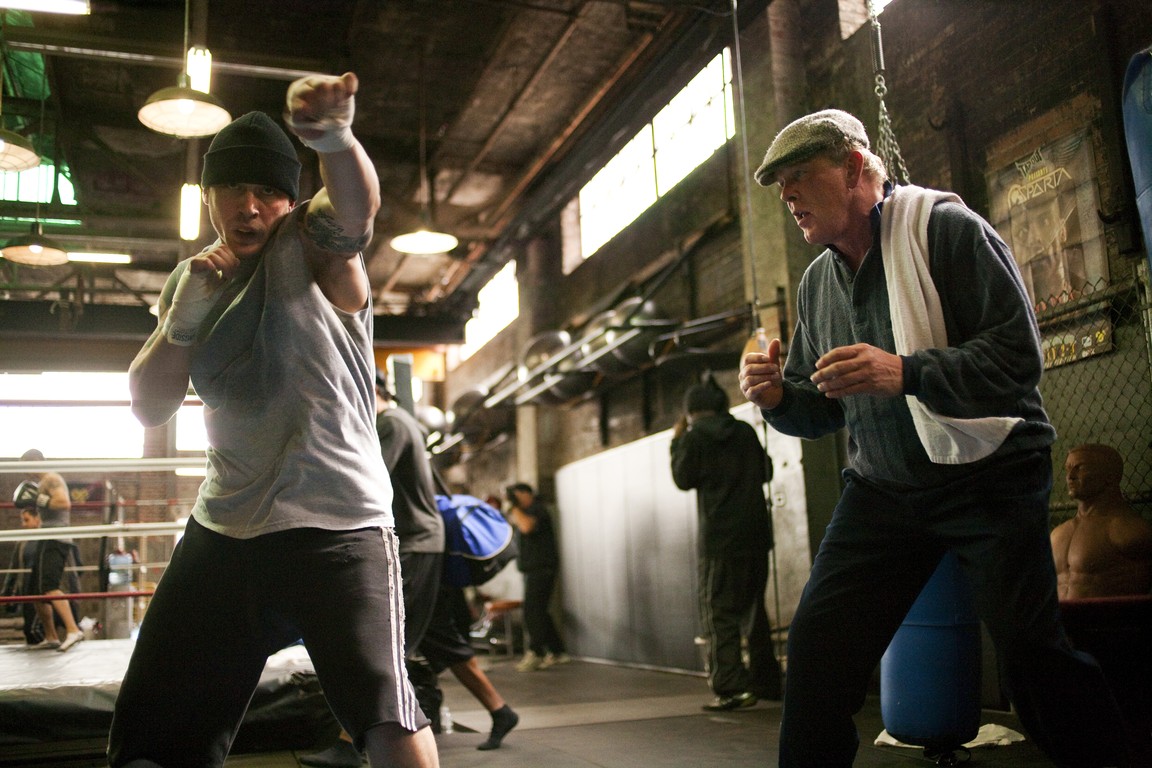 Believe it or not, there are four movies made in Pittsburgh featuring boxing, wrestling, and fighting. You know the “Rocky” series, but these also pack a punch, hold you in a vise, and just might knock you out! 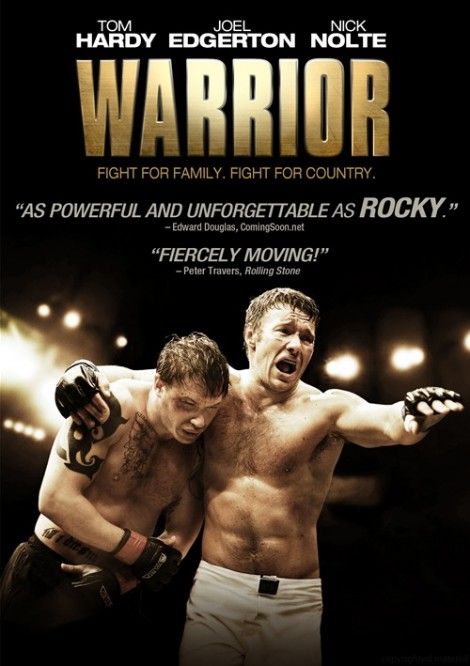 (Rated PG-13) Opening shots establish Pittsburgh’s smoky mills, bridges, and shabby little houses, screen shorthand for Working Class Story. Nick Nolte plays Paddy Conlon, a former boxer and alcoholic who abused his wife and two sons. He’s now living alone, sober and leading AA meetings. Brendan, his youngest son (Joel Edgerton), just home from Iraq, visits the local gym and takes down the champion. He feels he can do even more, and goes to his father to ask for training, while still not forgiving him.

Meanwhile, in Philadelphia, older son Tommy (Tom Hardy) and his wife are struggling to raise two daughters, pay medical bills from one daughter’s heart surgery, and pay their upside-down mortgage. Tommy teaches high school physics. He’s entertaining and effective in the classroom, loved by students. Then word gets out about his other job, fighting in parking lots of strip clubs. “This isn’t moonlighting at Applebee’s,” his principal says. Tommy is suspended without pay, which gives him even more motivation and need to fight.

Both brothers separately train for a tournament billed as the “Super Bowl of Mixed Martial Arts,” with a $5 million prize. Along the way, the family story and Brendan’s war story come out, and father and brothers battle each other over old betrayals. Nick Nolte, so touching in “Lorenzo’s Oil,” does equally well in these powerful scenes, desperately reaching out for understanding, then pulling back when both sons reject him. Hardy and Edgerton have their own conflicts that lead to the climactic final battle.

Mixed martial arts use boxing, kicking, and wrestling, and according to the movie’s announcers at least, “anyone can beat anyone on any given night.” The fights look brutal, but the music is almost as inspiring as the “Rocky” theme. Tommy’s trainer uses Beethoven to teach his fighters to relax and breathe, and Tommy’s entrance music is “Ode to Joy.” Interesting details add depth to the characters; for instance, Paddy’s audiotapes of “Moby Dick” give hints of his own traumatic war experience. During the final fight, there are engaging reaction shots from the students and the now-enthusiastic principal, watching from the McKeesport’s Twin Hi-Way Drive-In. “The Burgh” is mentioned twice, there’s a Terrible Towel hanging in one character’s room, but the most Pittsburgh part is when a waitress says, “Here’s your coffee, hon.” 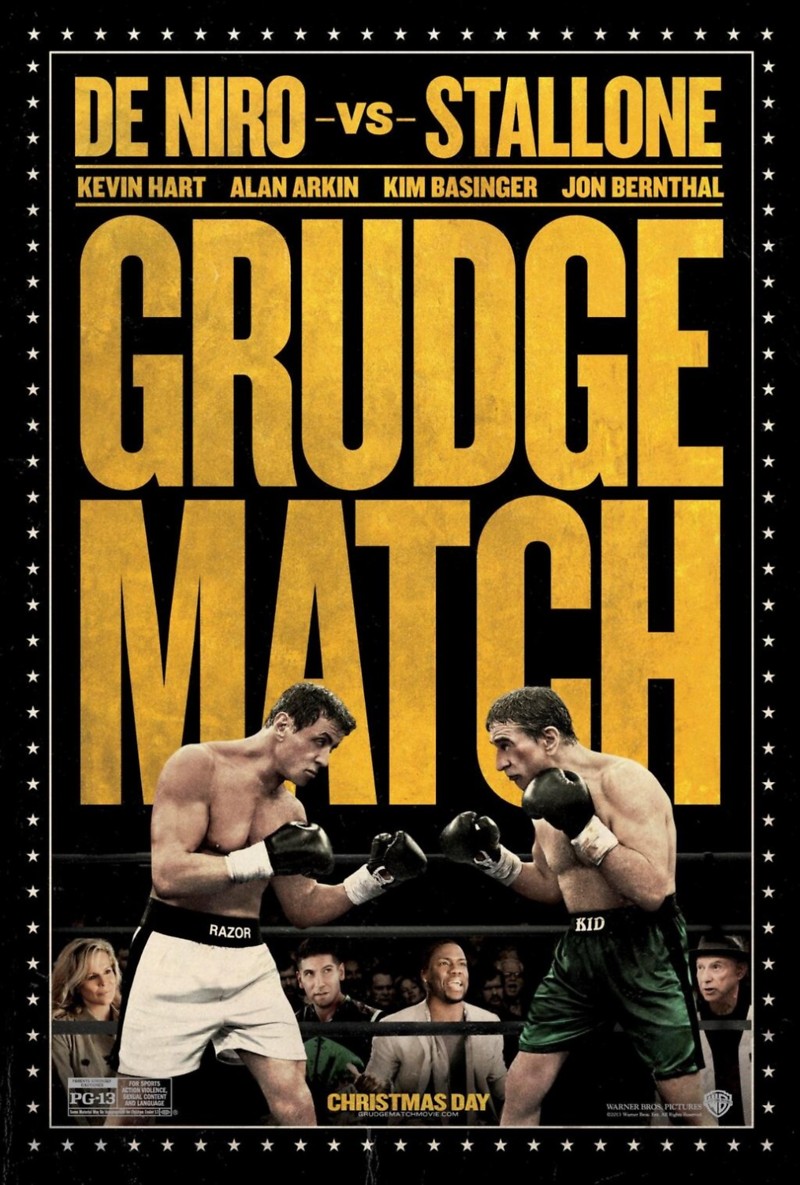 (Rated PG-13) I can hear the elevator pitch for this one: “Take Stallone, from ‘Rocky,’ and De Niro, from ‘Raging Bull’ - put ‘em together as boxing rivals coming out of retirement for one final bout! Add Kevin Hart and Alan Arkin for more comedy - genius!”

You could watch this as kind of a palate cleanser between Pittsburgh’s other fight movies, until the final match really does become serious and bloody. De Niro plays Kid, a bar owner shown doing some unfortunately lesbophobic stand-up comedy; Stallone plays Razor who works at a mill and makes whimsical sculptures out of iron scraps. Kim Basinger is The Old Girlfriend, and there’s a subplot about Kid’s son (Jon Bernthal) and grandson to add some weight to the grudge match.

There are plenty of funny lines, including some that poke fun at “Rocky,” and a touch of slapstick (I confess, I loved it). The customary training montage is laced with humor as well, with scenes of avoidance and recovery for the two older actors. Jon Bernthal’s character is a coach at Pitt, and the movie opens with a reference to “two fighters from Pittsburgh'' and shots of the city. However, the “Goofs” from IMDB.com include a Winn Dixie sign in the stadium (not a local store) and a car dealership that is open on Sundays, which is illegal in Pittsburgh. 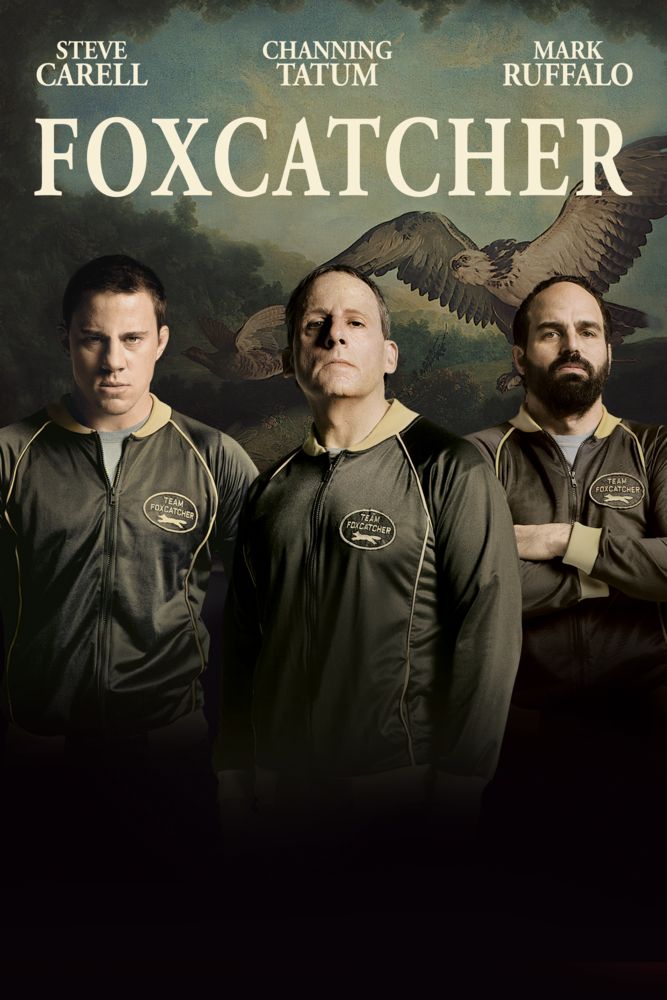 (Rated R) From a true story. Dave and Mark Shultz, both 1984 Olympic gold medal wrestling champions, live in poverty while they train and prepare to compete again. Mark Ruffalo plays Dave, the more personable of the two, supporting a wife and two kids as a trainer; his brother Mark (Channing Tatum) is more sullen and withdrawn. He’s also more susceptible to a visit from millionaire John du Pont (an unrecognizable Steve Carell) who takes him by helicopter to an elite training program on his estate. Mark stays with the other recruits in a “chalet” and they practice in a state-of-the-art gym, but they’re made to watch a video on the “history of the du Pont dynasty,” and they endure surprise late-night visits from their “coach.” With a mixture of patriotism and fatherly advice, du Pont lectures his recruits. His emotional and financial manipulation become more and more disturbing; he takes Mark to formal fund-raising events to show him off and leads him into drug use.

At first Mark’s brother Dave politely refuses to join the Foxcatcher team, not wanting to uproot his family. Mark says to du Pont, “You can’t buy Dave,” and du Pont’s reaction is a truly baffled “Huh.” With the offer of an all-expense-paid “cottage” house for his family, though, Dave agrees to serve as assistant trainer, gamely going along with du Pont’s inexpert suggestions. Mark and the other recruits respond better to Dave’s coaching, and du Pont’s jealousy intensifies. The story spirals into further tragedy, which would work better if the film moved faster. Still, the Academy Awards nominated Steve Carell for Best Actor, Mark Ruffalo for Best Supporting Actor, Bennett Miller for Best Directing, and the movie’s two writers for Best Screenplay even without my editing suggestions. 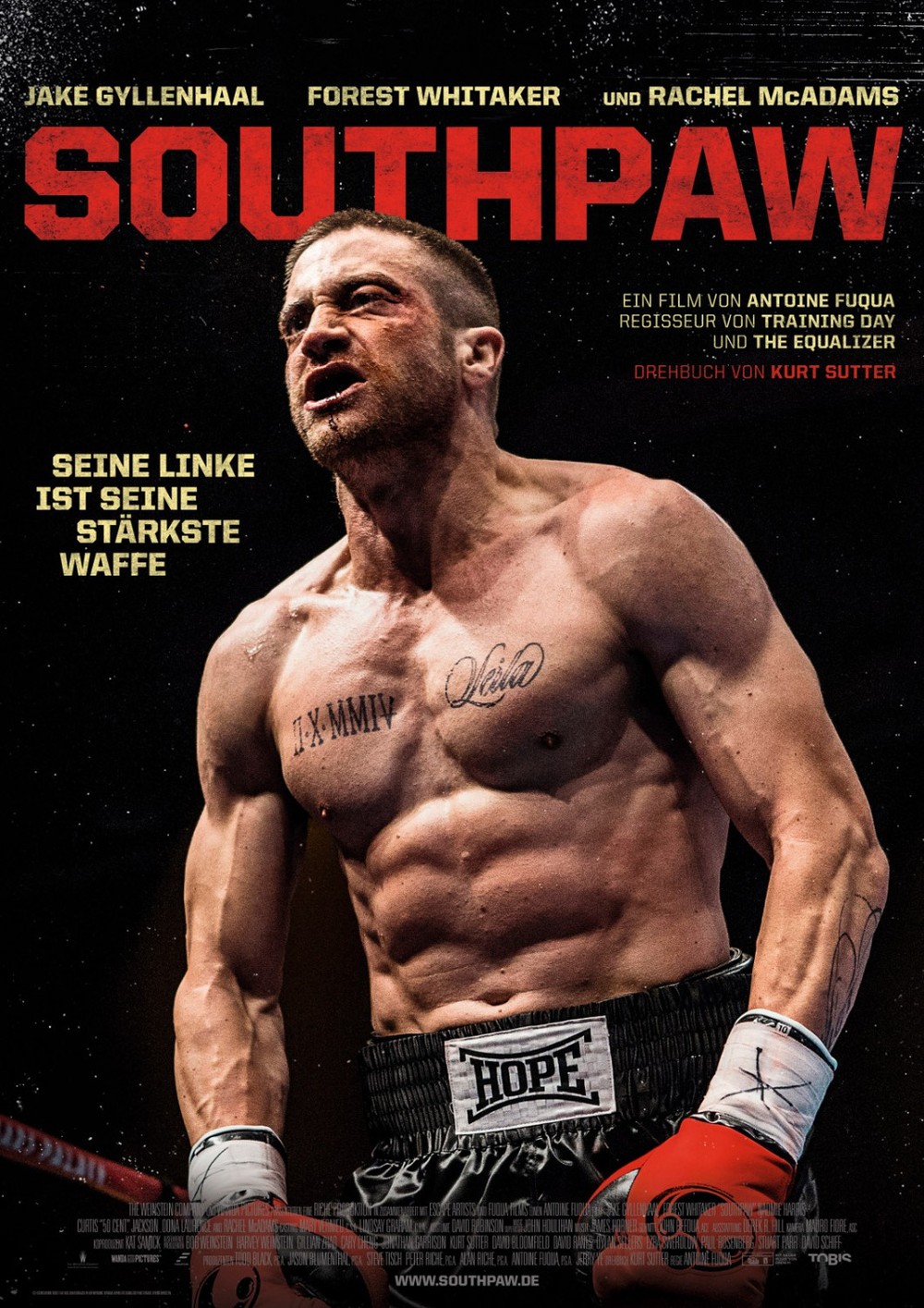 (Rated R) The movie opens to explicit rap lyrics and the ritual wrapping of Billy Hope’s hands. Gyllenhaal as Hope looks almost numb as he takes hit after bloody hit, then rallies to win. He and his wife Maureen (Rachel McAdams) go home to their young daughter and their lavish mansion (I didn’t realize boxing was this lucrative), but his wife warns him “You’re going to be punch-drunk in two years if you keep this up.” We learn that Maureen grew up in a “Hell’s Kitchen orphanage,” Billy’s mother birthed him while incarcerated, and he grew up in foster care. Boxing was his way out, but it also seems to be his way of punishing himself until his anger rises enough for him to fight back.

After losing his wife in a heartbreaking accident, Billy tries another fight but gets beaten down until he head-butts a referee in frustration. He’s suspended for a year, his manager leaves him, his daughter is taken away by child protective services, and he falls into ruin. Realizing he needs to straighten up to win back his daughter, he seeks out Tick Wills (Forest Whitaker), a trainer who teaches him to defend himself, calm down, and out-think his competitor. I really enjoyed Whitaker in this film; he brings so much heart, intelligence and humor, somehow without sentimentality.

Pittsburgh doubles for New York City, but one shot definitely shows our three rivers at the Point. In the bonus feature, director Antoine Fuqua, originally from Pittsburgh, calls boxers “the most vulnerable athletes of all,” and says the most important thing about “Southpaw” was Billy learning to be a father. When I read the film’s producers Alan and Peter Riche wanted a plot similar to “The Champ,” except with a father-daughter relationship, I flashed back to crying my eyes out at the Jon Voight/Ricky Schroder 1979 movie, a remake of the Wallace Beery/Jackie Cooper 1931 tearjerker. And I did find “Southpaw” surprisingly moving; I usually watch the credits but couldn’t really see them this time because, um, something was in my eyes.