As we all anxiously await the outcome of ongoing clinical trials seeking a COVID-19 vaccine, Carnegie Mellon University scholars, students, faculty, and staff might be surprised to learn that the Posner Collection holds a first-edition copy of the foundation text of modern immunology and vaccination: Edward Jenner's "An Inquiry into the Causes and Effects of the Variolae Vaccinae, a Disease Discovered in Some of the Western Counties of England" (London, 1798). In this scholarly blog post, Dr. Samuel Lemley, Curator of Special Collections, examines the item.

Published in London in 1798, Edward Jenner's 75-page treatise, "An Inquiry into the Causes and Effects of the Variolae Vaccinae," announced a new method of inoculating against smallpox that involved injecting ‘morbid matter' (or pus) extracted from the sores of cowpox-infected farmworkers. 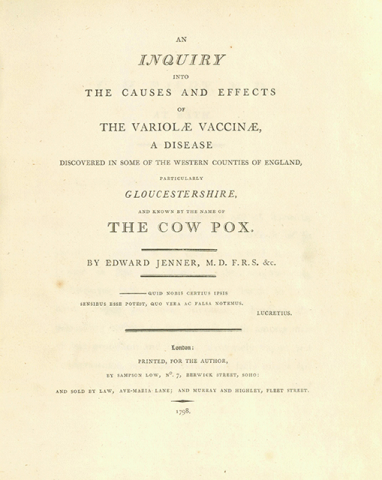 Although Jenner wasn't aware of the pathogenic cause of the new inoculant's success—the cowpox (variola vaccina) and smallpox (variola major) viruses are genetic kin, distinct but similar enough to ensure that exposure to one induces immunity to the other—he was familiar with its effect: 'Morbid matter of various kinds, when absorbed into the system, may produce effects in some degree similar,' he wrote, 'but what renders the Cow-pox virus so extremely singular, is, that the person who has been thus affected is for ever after secure from the infection of the Small Pox […]' (6).

Jenner did not arrive at this finding by chance, of course. True to its name, the Inquiry forms a series of case notes that describe Jenner's experiments with attenuated inoculation. One of these case notes recounts Jenner's treatment of the eight-year-old James Phipps:[1]

The more accurately to observe the progress of the infection, I selected a healthy boy, about eight years old, for the purpose of inoculation for the Cow Pox. The matter was taken from a sore on the hand of a dairymaid, who was infected by her master's cows, and it was inserted, on the 14th of May, 1796, into the arm of the boy by means of two superficial incisions, barely penetrating the cutis, each about half an inch long.

This case resolved positively: on the seventh day, the boy 'became a little chilly, lost his appetite, and had a slight head-ach [sic.] […] but on the day following he was perfectly well.' More important, the boy was found to be entirely immune to smallpox: two months later, when Jenner introduced ‘variolous matter' under the boy's skin, 'no sensible effect was produced.'

Many of Jenner's case notes are accompanied by disquietingly beautiful illustrations depicting pox sores and pustules in various states of suppuration. One particularly arresting image shows the hand of milkmaid Sarah Nelmes, who had contracted cowpox through a scratch on her right hand (see fig. 1). 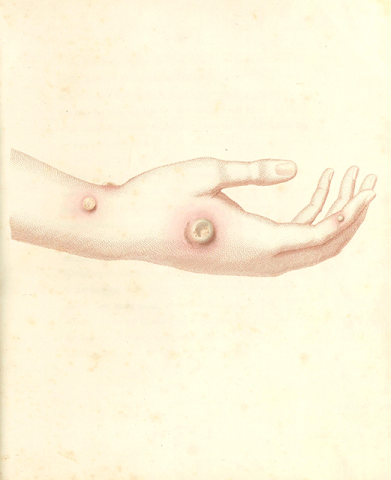 To speak of ‘herd immunity,' then, is to use a metaphor with roots in eighteenth-century pastoral. Modern vaccination (vacca, Latin for ‘cow') and the almost thaumaturgic prophylaxis it accords originated in—strange to say—a herd of cattle. As Eula Biss remarks in her 2014 book On Immunity, Jenner's coinage of a new Latinate disease (varoliae vaccinae, literally ‘smallpox of the cow') belies the humble origins of inoculation: 'its roots are in folk medicine,' she writes, 'and its first practitioners [wittingly or no] were farmers' and milkmaids (51).

Figure 1. Cowpox sores on the hand of Sarah Nelmes, a milkmaid who would provide the ‘morbid matter' Jenner used to inoculate James Phipps (1788-1853) against smallpox. The image is in fact a composite, as Jenner notes: 'The pustule on the fore finger shews the disease in an earlier stage. It did not actually appear on the hand of this young woman, but was taken from that of another, and is annexed for the purpose of representing the malady after it has newly appeared' (31-2).

While Jenner did not invent inoculation (a riskier form known as variolation had been performed in China and Africa as early as the 16th century), Jenner was the first to treat it as an evidence-based procedure with its own ethics. Jenner viewed vaccination as a way to restore balance to humankind's inborn immunity. In the preface to the Inquiry, he ascribes the eighteenth century's proliferation of diseases to '[t]he deviation of Man from the state in which he was originally placed by Nature.' The precarity of our health, Jenner suggests, is a product of our withdrawal from the natural world and its perceived benefits, benefits which (Jenner believed) vaccination could re-inject through fragile skin.

In this video created for The Conversation, Lemley describes the historical context in which Edward Jenner published his book about the smallpox vaccine.

Of course, Jenner's position was colored by a bucolic idyll in which he imagined milkmaids took willing part, but his attitude is remarkably modern, particularly in the face of recent and persistent disinformation that portrays vaccines as unnatural and transgressive, even if patently lifesaving. Opening the marbled boards of Jenner's book 222 years after its publication reminds us of the tenuous nature of wellness and the often-fraught process by which progress in medicine is painfully won: the last recorded case of smallpox was diagnosed in 1977, and it wasn't until 1980 that the World Health Organization (WHO) announced the disease's final eradication. Happily, the Libraries' copy of Jenner's Inquiry has been scanned and is available for remote consultation during this time of mass quarantine. I link it here with the usual caveat (don't try this at home): http://doi.library.cmu.edu/10.1184/OCLC/07490661.

To schedule a visit with Dr. Jenner or to inquire after his book, contact Curator of Special Collections, Sam Lemley.

[1] The Carnegie Mellon University Libraries' copy of Jenner's An Inquiry is the first edition (Posner RC183 .A2 J4); a Latin edition was published in Vienna in 1799 and a second English edition in London in 1800.