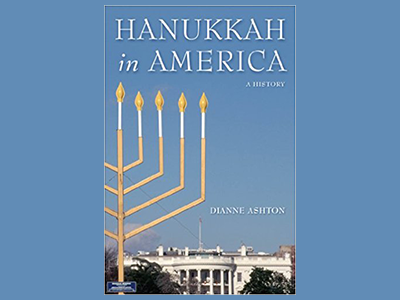 Hanukkah in America: a history by Dianne Ashton

How did a minor and relatively simple Jewish holiday become one of the most recognizable, important and visible celebrations of the year? In Hanukkah in America: a History, Dianne Ashton theorizes that the holiday's simplicity, and its occurrence in December, allowed American Jews to magnify it into a family and community marker to stand against the cultural dominance of Christmas.

The story of Hanukkah is one of persistence and faith, resistance to oppression, and triumph through bravery and/or through a divine miracle. In 176 B.C.E., Judea came under the control of Antiochus IV, and Jewish religious practices were replaced by Hellenic rites which defiled the Temple. The Maccabean Jews led an armed revolt, regained control of Jerusalem and rededicated the Temple. Only one day's portion of holy oil remained, but that oil burned brightly for eight days until more could be made. The name 'Hanukkah' comes from a Hebrew word meaning 'to dedicate,' and it is celebrated by lighting a new candle each night on the Hanukkah menorah.

Immigrating to America, many European Jews lived for the first time among a majority Christian society. The dramatic story of the Maccabees' struggle became a metaphor for Jewish efforts to avoid assimilation and maintain their identity. Through debates and disagreements about proper ways to celebrate, American Jews added hymns, rituals, plays, games, food and toys to promote Hanukkah as a family and community event. Rabbis encouraged Jewish parents to give their children small gifts to add excitement and to counteract the attractions of Christmas.

After World War II, Hanukkah took on added significance as a celebration of Jewish survival. As Ashton says, 'Jews felt increasing urgency that each Jewish child must now grow into a healthy adult with a strong Jewish identity because one-third of the world's Jews had been murdered.' Hanukkah became a tool for parenting, a way to instill dedication to the Jewish faith. Though some Jews reacted to the Holocaust by questioning how God could allow this evil, rabbis and Jewish leaders encouraged every Jew to claim the message of strength and hope at Hanukkah.

Ashton details many of the controversies sparked by Hanukkah – was it a hard-won battle or a heaven-sent rescue? Should Jews allow lighted trees or 'Hanukkah bushes' in their homes? Are gifts, cards and decorations celebrating or commercializing the holiday? She outlines the history of public Christmas and Hanukkah displays, citing the Pittsburgh 1989 display of the eighteen-foot-tall menorah beside a forty-five-foot tall Christmas tree on the steps of the city courthouse, with a nativity scene inside the courthouse. After a complicated Supreme Court decision, the crèche was removed while the tree and menorah stayed. This compromise set the tone for recognition of religious diversity, liberty and good will. In fact, a recent event in Pittsburgh commemorated the decision, as reported by the Pittsburgh Post-Gazette: http://www.post-gazette.com/local/city/2017/12/07/Shedding-light-on-an-old-menorah-case/stories/201712060179

Some may claim that recognizing other holidays constitutes a 'war on Christmas,' but Hanukkah in America: a History truly shows the courage American Jews have needed 'to remain faithful … during the Christmas season, when their minority status became most vivid.' Surely a simple greeting of 'Happy Holidays,' or a menorah standing beside a lighted tree, can't be too much to ask.