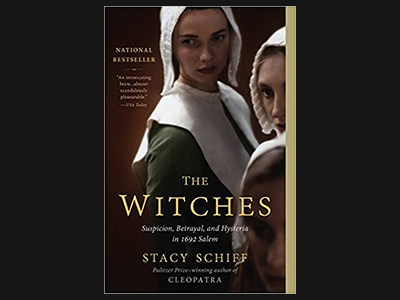 The Witches: Salem, 1692 by Stacy Schiff is an exhaustive (and at times, exhausting) account of the accusations, imprisonment, trials and executions of fourteen women and five men. It's a story we all think we know, but Schiff places us in this world so completely, we can feel the chilly air and hear the howling of dogs at night.

Living with instant communication, electricity to light our way, and relative safety for most of us, it's difficult to imagine Puritans living with complete darkness at night, terrified by sudden stealthy and random French and Indian attacks, and relying on gossip and rumors for news. Child mortality was high, and winters were cruel. Sounds and shapes could seem monstrous, whether or not there was anything or anyone to fear. Belief in the devil was part of Puritan religion, and belief in the supernatural was part of New England culture. Witchcraft 'tied up loose ends, accounting for the arbitrary, the eerie, and the unneighborly. … And when diabolical machinations were what you were watching for, they quickly became what you saw.' Besides the appeal of the mysterious, Puritans' belief in witchcraft also grew from the insecurity and guilt in their religion, and from their history as persecuted outsiders.

Puritans raised their children to be intensely aware of their spiritual state, terrifying them from early childhood with Scriptural threats of death and hell, continuing into their teens. The girls in particular were constrained by higher standards and expectations. With nothing but long days of household labor, submission to their fathers and ministers, and only a six-hour church service for amusement, the 'hysterics' expressed by teenage girls become much more understandable. Since medicine at the time was so primitive, and imaginations so active, moles could be seen as 'devil's marks' and outbursts of giggling as 'affliction.' Illness, crop failure, death of children and animals, and any other misfortunes could be blamed on witches as well. And as Schiff points out, as the craze went on, it became safer to accuse than to be accused. Any citizen who was disliked could be imprisoned for witchcraft.

So many New Englanders were imprisoned, and so many others became exhausted from visiting prisoners or working on the trials, that Salem's economy started to suffer. Homes of accused villagers were looted, livestock confiscated. Schiff details the trials and the executions – all hangings, except one elderly man who was pressed to death. After the witch craze died down, New England seemed to want to forget the horrors of their own obsession. Schiff examines the guilt and shame, the efforts of the families to demand reparation, and the lack of any official apology.

The Witches – subtitled Suspicion, Betrayal, and Hysteria in 1692 Salem in the paperback edition – is full of fascinating details. I recommend reading at least the first and last chapters for the many flashes of recognition and insight. During this particular time in our nation's history, when politicians demand loyalty, blame 'outsiders' and defend themselves by claiming 'it's a witch hunt,' reading about the paranoia behind our nation's actual witch hunts offers us strength to stand our ground.