Fire Shut Up in My Bones by Charles M. Blow 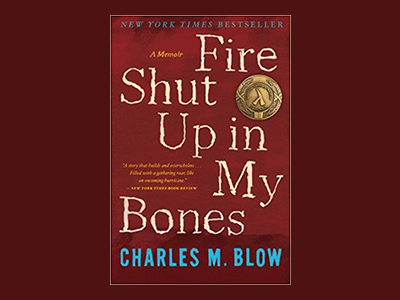 Fire Shut Up in My Bones opens with the author driving down the highway, crying, screaming, with a gun on the car seat beside him, headed toward revenge. Then we’re pulled back into the childhood of that wounded man, a story told so well that by the time we come to that scene’s resolution, we’ve almost forgotten it.

But we never forget the damage caused by this “betrayal,” as Charles M. Blow accurately names it. We call these kids “children at risk,” caught in the grind of poverty, moving from one relative to another, families devastated by illness, abuse and hopelessness. For African Americans, racism compounds the mix, especially in a rural town in northern Louisiana where “whites and blacks [were] mostly separated by a shallow ditch and a deep understanding.” The history of slavery lives on in towns named for plantations and for white men’s farms, the black communities situated in former slave quarters. Blow’s mother makes him aware of this history, and the author documents her struggle to graduate college and work as a teacher, not “in the white man’s field or in his home."

I confess, as I was reading about homes with no indoor plumbing, and children scavenging for toys at the city dump, I’d unconsciously place the story in the 30’s or 40’s. Then I’d be startled by a reference to an 80’s song or event and reminded that such extreme poverty still exists in the U.S. I sometimes lost track of which relative was which, but I loved descriptions like the “old women who sat whiling away the days in sagging chairs on rickety porches … looking out through eyes grown wise from bodies grown frail.”

Violence born from desperation runs throughout the book, in startling sentences like “The only time I ever saw a person actually shoot a gun at another, I was five years old, and it was my mother shooting at my father.” Blow’s father was alcoholic and “wandering” with “High-heeled, naked-leg women. Too-short-dress and too-much-teeth women.” As Blow says, historically in his community, “When someone felt wronged, they ignored the code of law and invoked the code of honor, leaving the details for God to sort out later.” Taught by his grandfather to shoot a gun, Blow felt “the profound discomfort of how easily and irreversibly its lethal power could be unleashed.”

Instead, he learns to assert himself in other ways, to create a character for success in school and with friends. Struggling with the repercussions of childhood sexual abuse, teen sexuality, religion, the “cultural currency of skin tone” in the U.S. and in the Black community, Blow enters college, only to find himself again surrounded by violence and abuse in the hazing rituals of his fraternity. The stomach-turning details of these rituals, still perpetuated by fraternities with the deadly results in the news to this day, are difficult to read and even harder to understand.

Blow’s writing can be effortlessly graceful, as when he describes his belief in the original “God that exists apart from books and rules and fear, the God that we first come to know before we know much of anything, God as only children know God.” Deciding to turn away from his urge toward the violence of the opening scene of his book, however, Blow offers paragraph after paragraph of conclusions; a good editing would have contributed to a more powerful effect. It’s a small failing though, and one I’m glad to overlook in this searing, unforgettable book.